On the evening of 7th October, Harvey Nichols Leeds invited me to a Q&A event with Kristina Blahnik, Manolo Blahnik‘s lefthand woman when it comes to his family-run shoe empire who is also, incidentally, his niece. Here’s my story of the intriguing and fascinating stories she told us… 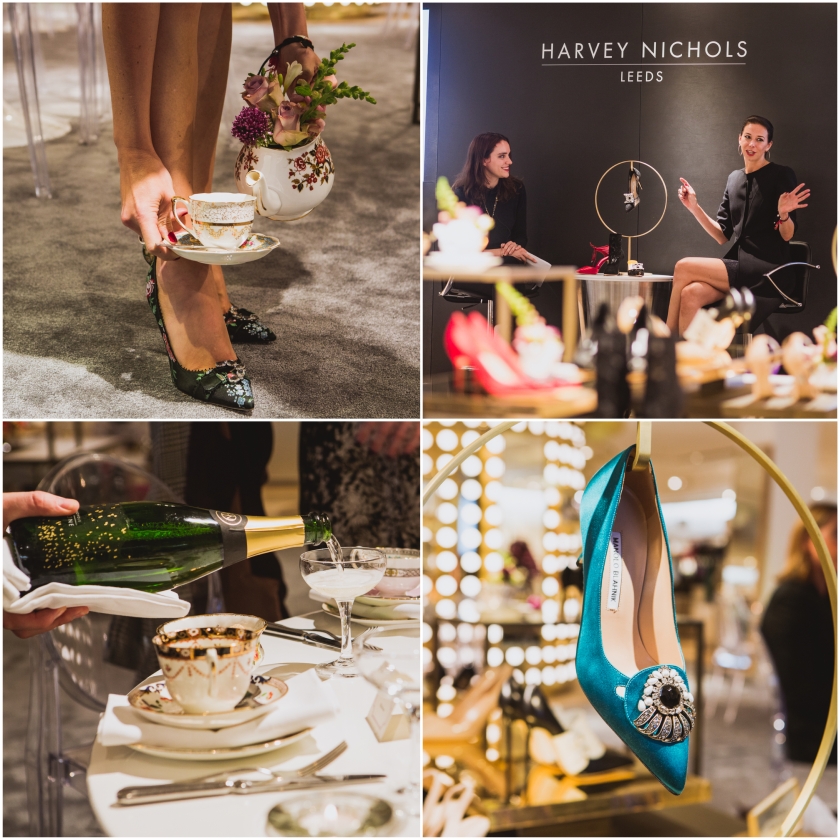 Leaning against the structure of the water fountain in the central hub of the Victoria Quarter in Leeds after a day at work, I browsed my Instagram and checked my emails before entering Harvey Nichols to attend the Manolo event. As I anticipated the occasion, I thought about what Manolo Blahnik meant to me. The first image that sprung to mind was a youthful Carrie Bradshaw pounding a New York sidewalk in a pair of Manolo Mary Janes followed by a scene from Sex and the City where Carrie exclaims ‘Manolo Blahnik Mary Janes! I thought these were an urban shoe myth!’. For Manolo Blahnik, Carrie was the turning point for the designer’s commerciality, something he never pushed for, however after Candace Bushnell wrote his shoes into the book out of pure choice, it became inevitable. His designs weren’t a fashion insider’s secret any longer but a couture shoe-shaped delight that everyday women lusted over.

As I pondered these thoughts, a tall woman glided past me with a straight black coat draped over her shoulders, hair in an elegant chignon and tanned legs accompanied by a pair of heeled shoes that glided simultaneously with her long strides. I instantly knew it was Kristina Blahnik. Even within the grandeur of the Victorian Quarter, she stood out.

After a quick trip to Starbucks, I headed to Harvey Nichols and was directed to the second floor where a private tea party had been set up in anticipation for Kristina’s arrival. The tables were embellished with mismatched vintage tea sets and as I sat down I noticed I was surrounded by Manolo shoes, from the prestigious blue sapphire satin pump (have you seen Olivia Palermo’s wedding photos?) to a black laser cut boot from this season’s Victorian inspired collection. Intermingled between the mini spectacles, teapots and cups and saucers had been intricately placed and decorated with British field flowers. The attention to detail was more than I expected and Harvey Nichols Leeds really excelled in creating an opulent atmosphere that truly reflected Manolo Blahnik’s ethos as a luxury brand that strives to create exceptional pieces.

The questions were delivered by Mariella Tandy, Fashion and Retail Editor of Tatler magazine who asked Kristina about everything from her childhood to her current role as a heavily involved and important cog in the enchanting Manolo machine. Moving to the UK at six years old so her mother could work for the business, Kristina was always surrounded by the world of Manolo as it was so inbuilt within their family. She somewhat escaped it when she decided to be an an architect which progressed into a successful career for eighteen years, however five years ago, she returned to the business and took up the role as CEO of Manolo Blahnik.

It was apparent from the Q&A that Kristina highly adored and respected her Uncle Manolo. Moving to London as a young man to be a theatrical set designer, Manolo somehow evolved into creating beautiful shoes for women which, Kristina explained, just kind of happened naturally. What I find most exciting about Manolo is the way in which he designs his shoes. Nothing is compromised due to commerciality. In fact, Kristina explained that commerciality is very low down on his list of priorities. Instead, Manolo focusses on quality. Kristina stated that she cannot imagine a day where Manolo Blahnik shoes will be made outside of Italy. He has his own rule book when it comes to designing and he never listens to his head when creating, it’s always his heart, something he is able to do easily as he is the sole owner of the business, therefore he has noone but himself to answer to. He designs and makes around four hundred pairs of shoes every year, two hundred a season, a feat to most but to a creative genius like Blahnik, an absolute dream. Kristina confessed that there are around 30,000 pieces in their archives and after discovering a 40 is their sample size (my size) I would love to track that place down…

It was a pleasure to get to know more about Kristina and the story of  Manolo Blahnik as a person and as a brand. With Manolo now exceeding retirement age, it must be of great comfort to know he has Kristina to represent his family and the business in the future. For me, Manolo Blahnik shoes are all about indulgence and fantasy wrapped in a couture frame of mind and a Spanish man with a magical talent.